Initial Analysis of Data Through March 28 and Methodology

COVID-19, and the policies enacted in response to the disease, have resulted in dramatic changes in many aspects of American society. These changes have been particularly large in the labor market. It has been challenging to understand the magnitude of these changes because standard data sources become available only with a lag of several weeks – we will not receive data on employment and unemployment after shelter-in-place orders took effect until the first week of May. Below, we take advantage of granular data on exact hours worked among employees of firms that use the Homebase scheduling software to provide an up-to-date picture of the labor market impact of COVID-19. We measure how the impact varies across geography and industry, how it evolves in response to state and local social distancing guidelines and orders, and how concentrated it is among particular sets of workers.

Homebase provides scheduling and time clock software to tens of thousands of small businesses employing hundreds of thousands of workers across the US and Canada. This scheduling software generates granular data on exact hours worked every day for all hourly employees at customer firms, providing a much higher-frequency and more detailed picture of employment and hours than traditional labor market datasets. This greater detail and higher frequency come at some costs; Homebase’s customer base is disproportionately composed of small firms in food service, retail, and other sectors that employ many hourly workers.  The data exclude most salaried employees, firms who do not require this type of scheduling software for their operations, and larger firms who would use their own software for this purpose.  Consequently, insights derived from the Homebase data should be viewed as relevant to hourly workers in small and medium sized businesses, rather than to the labor market at large.

Despite these limitations, we think these data provide valuable information for two main reasons. First, hourly workers at small businesses may be most vulnerable to the economic disruption caused by COVID-19, so understanding how they are being impacted is of significant policy importance. Second, hourly employees are one of the easiest employment margins for firms to adjust, so measuring changes in outcomes for these workers may provide a more real-time picture of the labor market than other types of workers whose hours firms find more difficult to adjust.

Below, we describe four facts about the effects of COVID-19 on the labor market for hourly workers at small businesses. We will update these facts frequently to track these patterns over time and add new information as the COVID-19 situation develops. An up-to-date version of this summary will be maintained here. These analyses build upon the work done by Homebase itself on their blog, where they have provided frequent analyses on what their data is telling us about labor market developments. 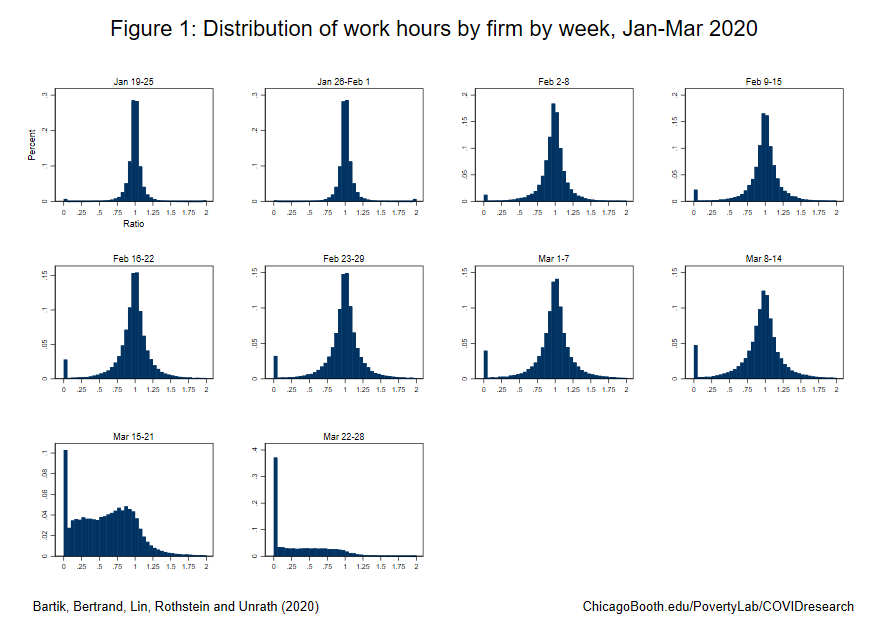 Figure 1 plots the evolution of total hours per week worked among firms in our sample from January 19 through March 28.  Each sub-plot shows the distribution of hours across firms, measuring each firm relative to its average hours per week in a base period of January 19 – February 1. Through early-March, the distribution of hours is centered around one, corresponding to stable hours worked, with a few firms shutting down (at least for the week) and reporting zero hours but little net change on average. The week of March 8, the distribution of hours starts to shift slightly left and then the week of March 15 the distribution shifts dramatically left. Most firms have significantly fewer hours than in the base period and over 15 percent of firms shut down entirely. In the week of March 22, over 40 percent of firms shut down entirely, with zero recorded hours, and many of the remaining firms having quite large reductions in hours. Fully 91 percent of firms had fewer hours that week than in the base period. 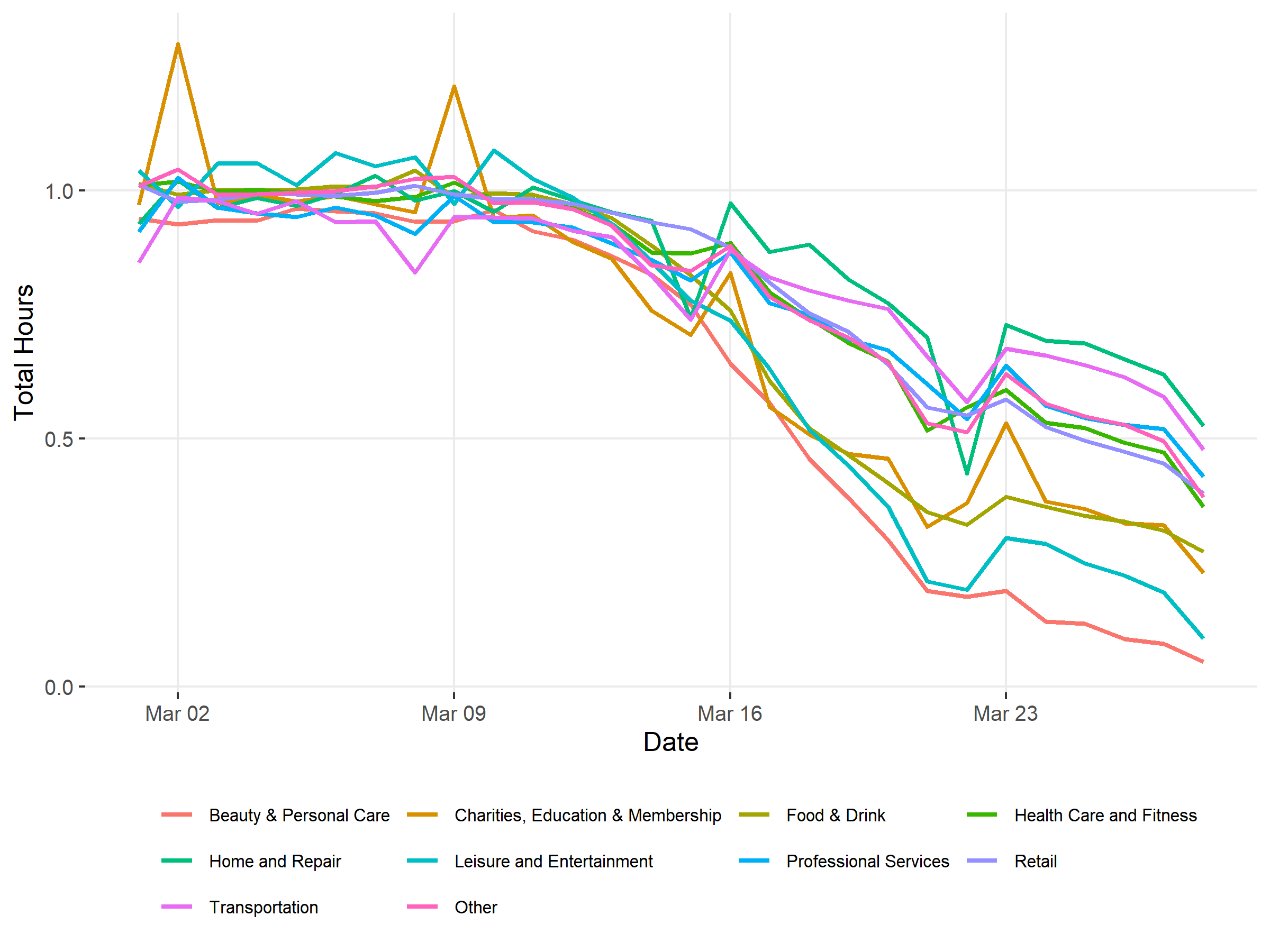 Figure 2 investigates how hours reductions vary by firm industry.  We see that reductions in hours are largest in Beauty and Personal Care and Leisure and Entertainment, where hours have declined over 90 percent. Hours declines are smallest in industries like Home and Repair and Transportation.  However, even in these industries hours have declined by around 50 percent. Broadly, the magnitudes of industry-level job declines appear to closely map the extent to which an industries’ workers are “essential” according to government social distancing orders, and whether consumption requires in-person interaction (i.e. whether remote work is possible). 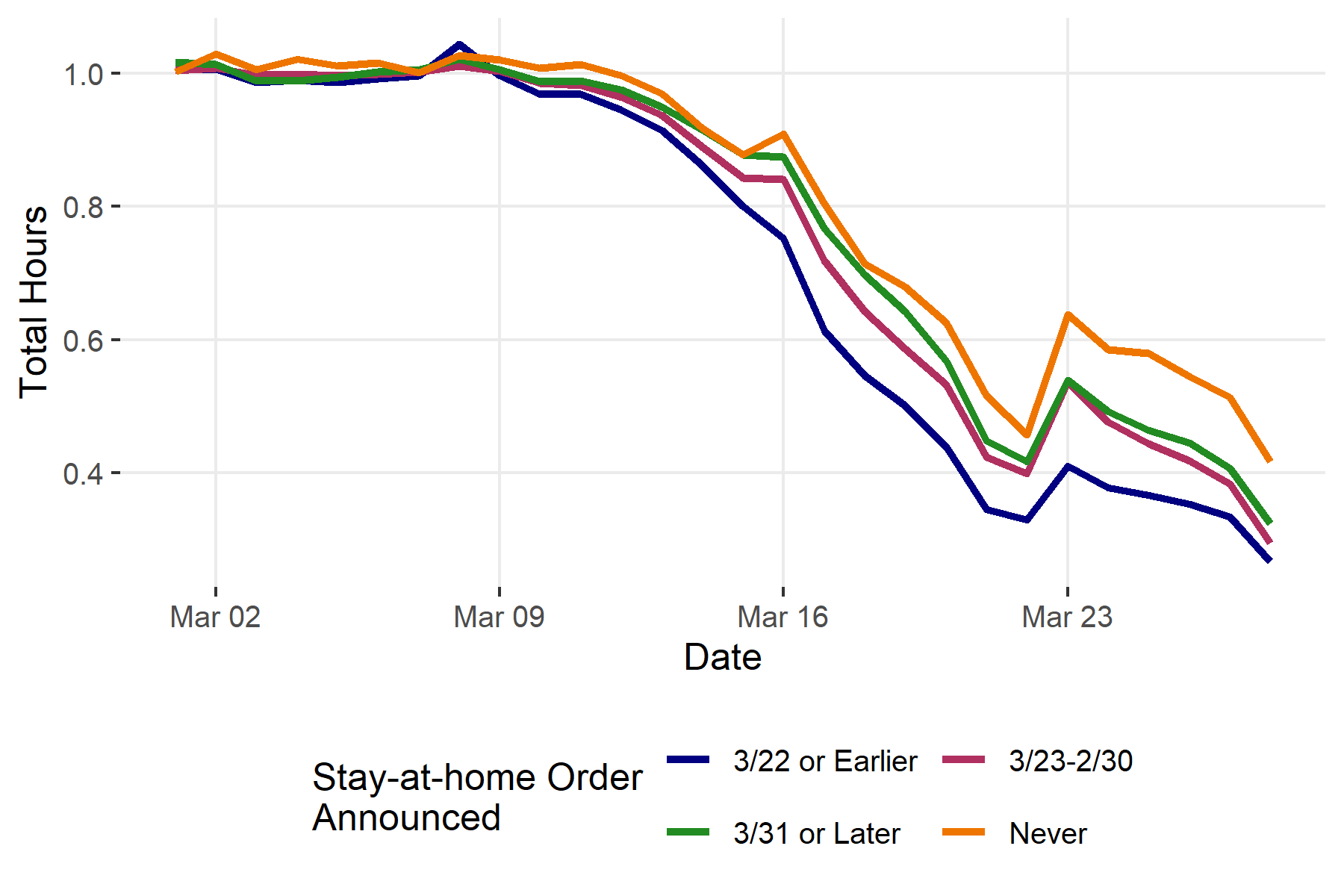 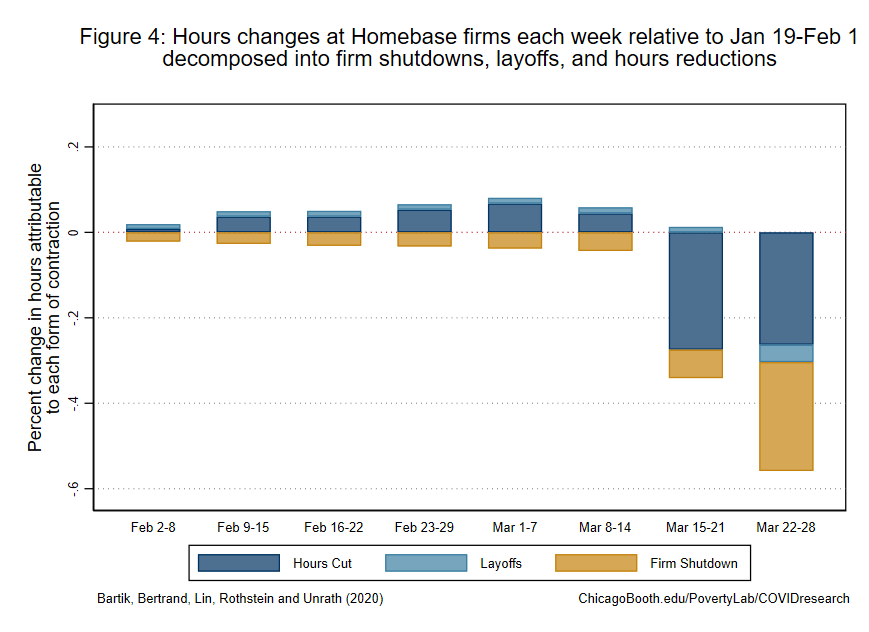 Figure 4 separates the total hours reductions documented in Figures 1 – 3 into three channels: shutdowns, layoffs, and cuts in hours. We define firms as having fully shut down in a given week if the Homebase data records zero employees clocking in at that firm during that week. We identify a worker as having been laid off in a given week if that employee works zero hours at a firm which is still operating. We define hours cuts as the reduction in hours, relative to that initial baseline, among workers still employed at still operating firms. The figure distinguishes which fraction of the percent change in hours each week since early February is attributable to these three forms of hours reductions. The total number of hours worked in the last week of March are less than half what they were in late January. Most of that reduction is due to firms fully shutting down or asking retained employees to work fewer hours. A smaller percentage is due to firms laying off a portion of their workforce. This suggests that the principal driver of unemployment claims is total firm shut downs. It also suggests that even still employed workers are suffering a cutback in their hours.

One important caveat to this decomposition is what we refer to as a firm shut-down is a shut-down of Homebase measured employment. If firms employ workers that do not schedule their time using Homebase and some of these workers remain employed, some of the hours losses that we attribute to shut-downs may instead be properly attributed to layoffs. Another caveat is that the “hours cut” category includes all workers with positive hours during a given week. Firms that shut down in the middle of a week, as well as workers who are laid off mid-week, will be counted in this category in the first week, and will not appear in the correct category until the first week in which they have zero hours.

[1] It’s important to emphasize that reducing activity and interactions between people is the goal of stay-at-home and shelter-in-place orders, so the earlier reduction in employment, particularly among businesses involving significant closer-contact such as Beauty and Personal Care and Leisure and entertainment, can be interpreted as the laws working as intended.  Other work, for example from Villas-Boas, et al (2020) suggests that, by reducing activity and mobility, stay-at-home and shelter-in-place orders may reduce hospitalizations and death due to COVID-19.