Update with Homebase Data Through May 23

Note: The results described in Figure 2 have been updated due to an error. Click here for the complete erratum. The error did not affect any of the other figures or results.

Thirty percent of firms from our baseline sample remain shutdown, down from a high of 45 percent in the beginning of April (Figure 1). Of the firms that ever have shutdown, nearly half (44%) have now reopened and remained open through last week. 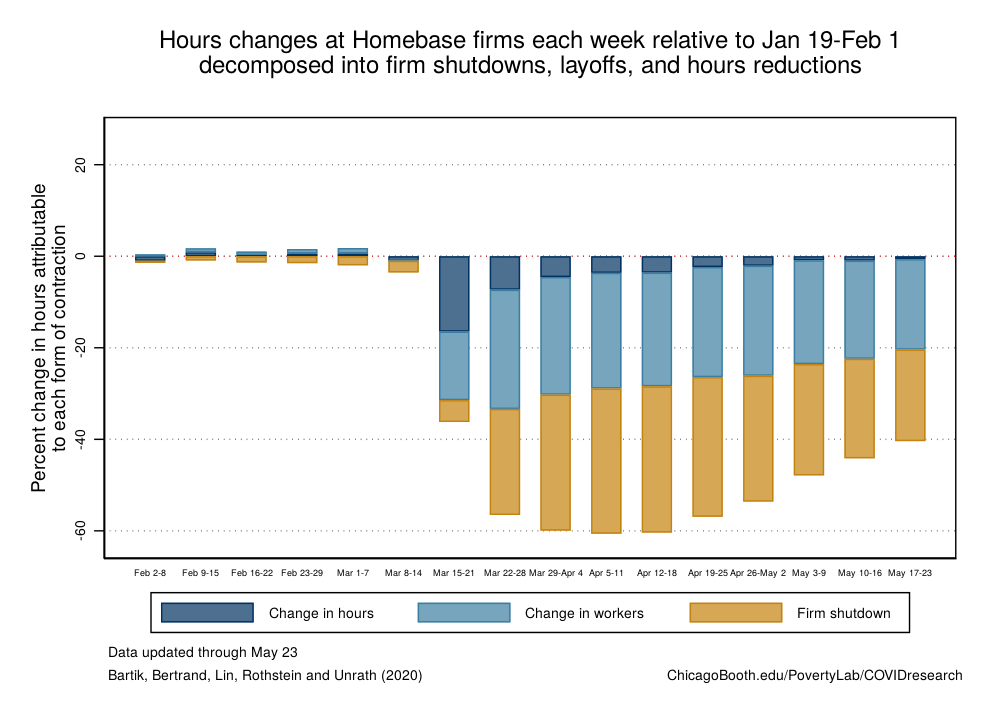 Fact #2: Firms in “reopened” states have restored the largest share of hours.

We should note that these differences may not be the result of states’ decision to reopen or remain shutdown. The likelihood of reopening is related to local disease burden and a number of other factors, which themselves are related to policymakers’ decisions about allowing firms to reopen. It’s also worth noting that, though there is a difference, the gap remains fairly limited. Government shutdowns of non-essential businesses do not appear to be the only obstacle to firms reopening. 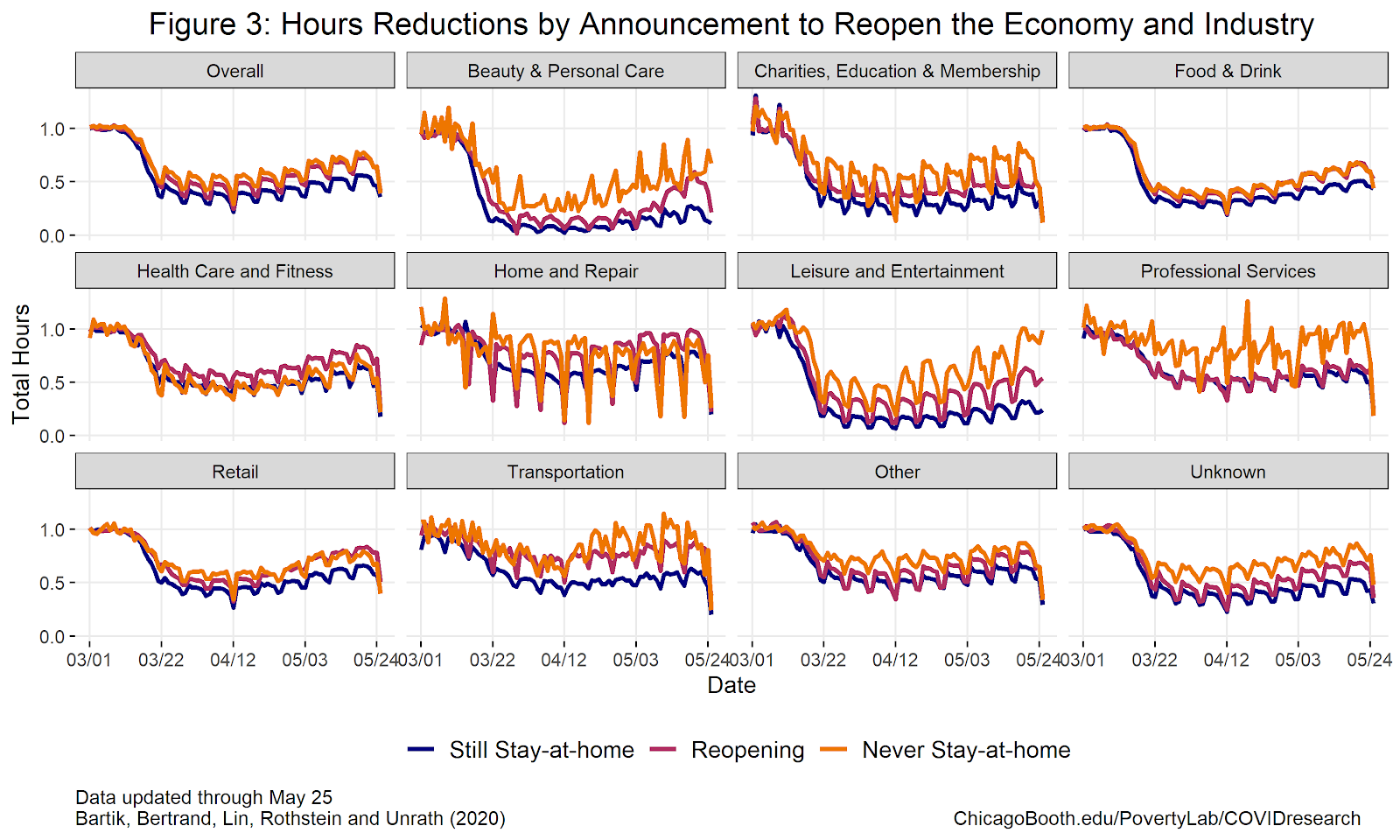 Fact #3: Reopened firms tended to re-hire original employees, but they’ve only restored a portion of their original hours.

In Figure 4, we show how much these firms’ baseline hours and workforce were restored through each week. By last week, these re-opened firms had collectively regained over half of their baseline hours and nearly 60 percent of their baseline employment levels. As in our last update, almost 90 percent of this reemployment came through re-hiring employees who worked at the firms before they shutdown, as opposed to new hires. This suggests that, so far, most worker-firm matches at these firms have been maintained through the crisis, firm-closures, and re-openings.

Figure 5 shows how hours have been restored (or are still missing) among firms that shut down before April 4. Across these firms, just over half of their collective baseline hours remain missing due simply to ongoing firm closures. Another 22% of hours are lost because reopened firms are operating at reduced scale. Counting all of the firms that have ever shut down, only about 25 percent of pre-shutdown hours have been restored. And again, almost 90 percent of those hours are worked by individuals employed by the business before it shutdown. 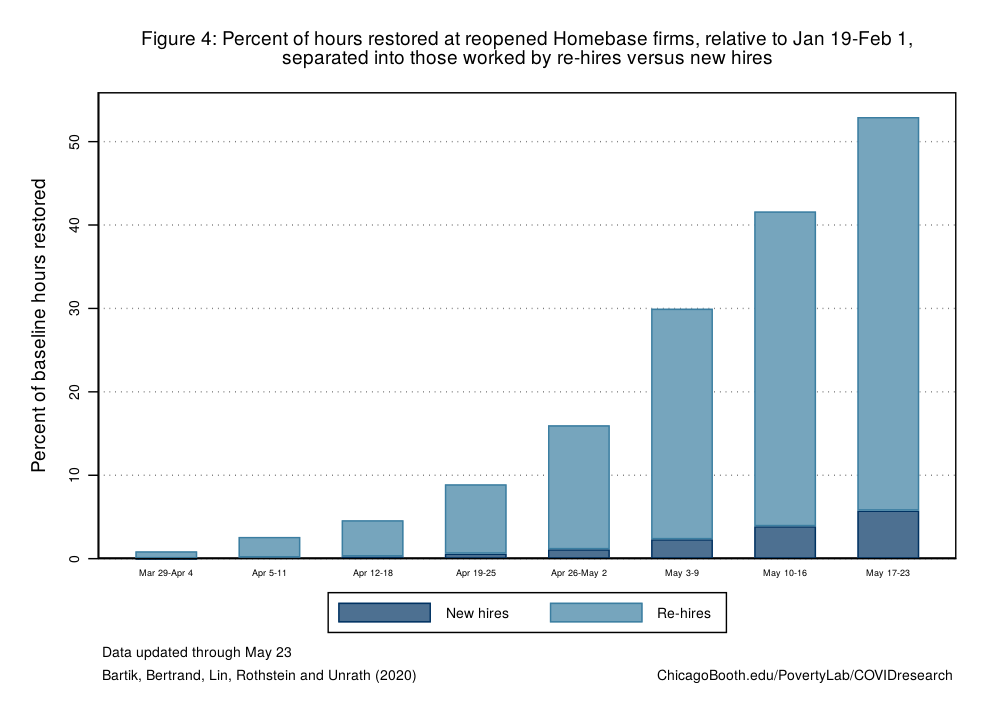 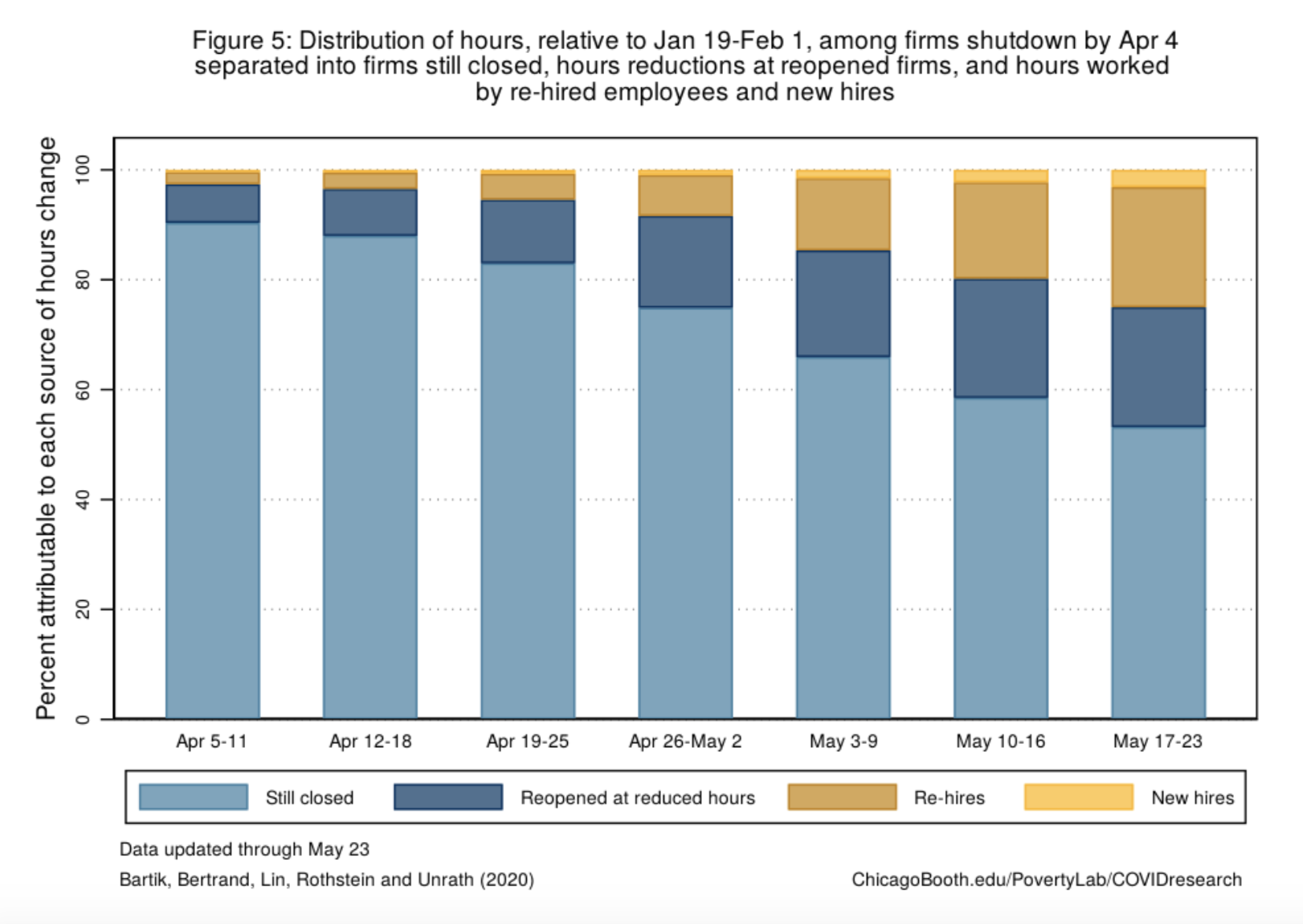 Our analysis is based on firms that use Homebase, which are not representative along many dimensions. They tend to be smaller than average, and concentrated in particular industries (such as food and drink and retail).
Below, we provide information on three characteristics of the firms in the Homebase data: the regions they are located in, the industries they operate in, and the number of employees they have. This information is based on firm characteristics between January 19 and February 1 and includes all firms operating during this time period, regardless of whether they have continued to operate through the COVID-19 crisis or not.

Figure 6: Homebase Firms Broadly Match the Distribution Across US Regions 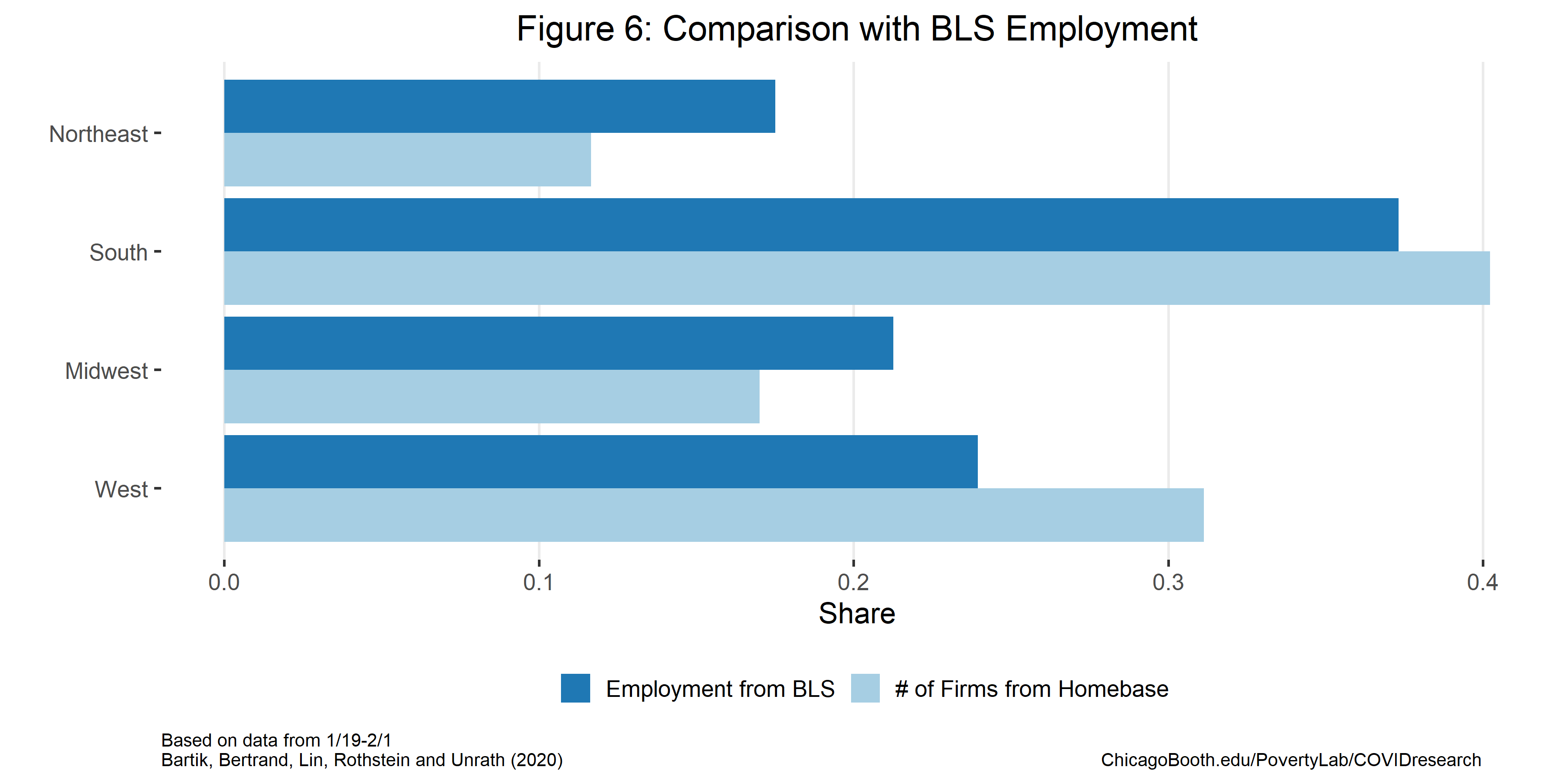 Figure 7: A Majority of Homebase Firms Are in the Food and Drink or Retail Industries 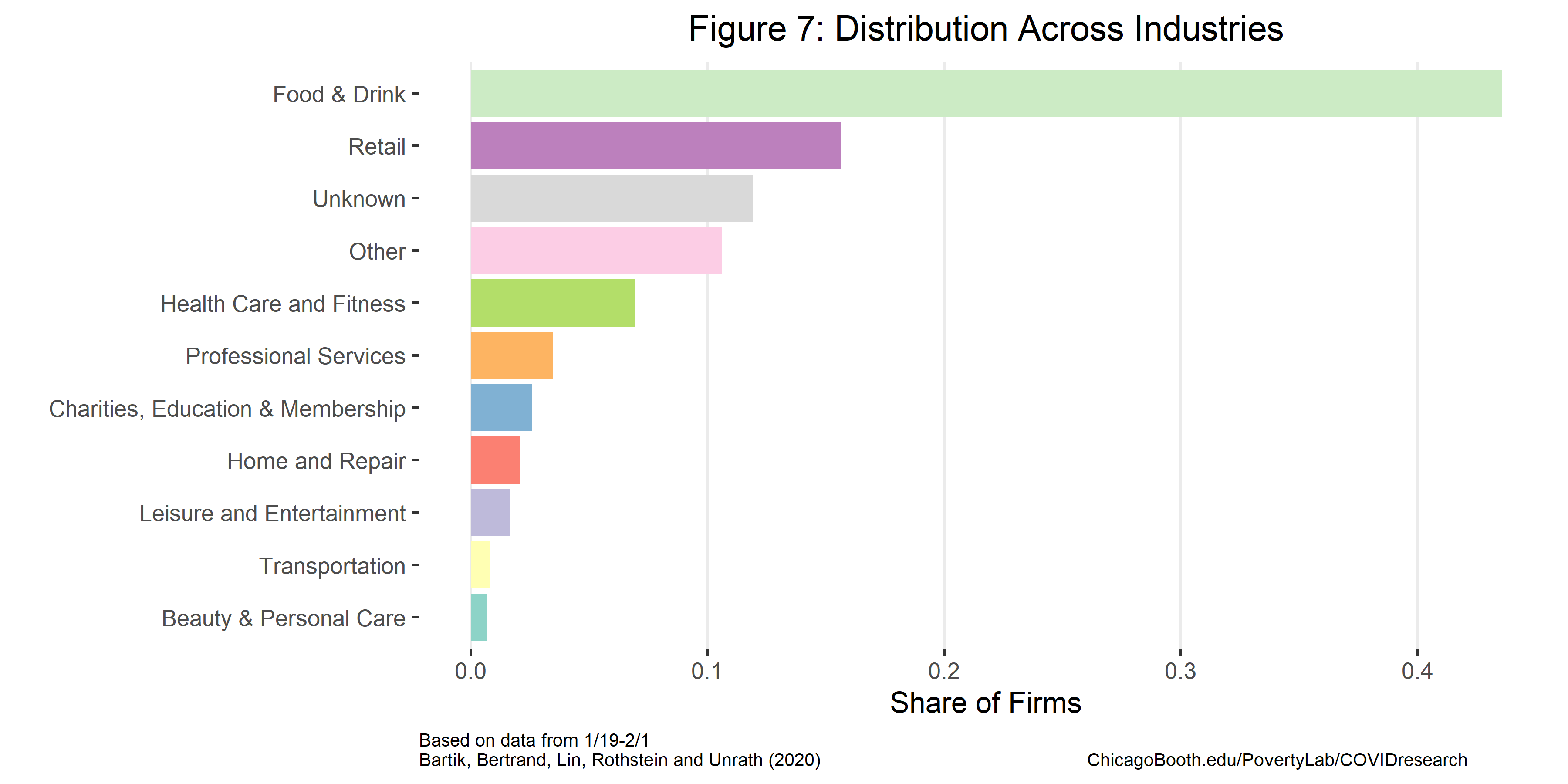 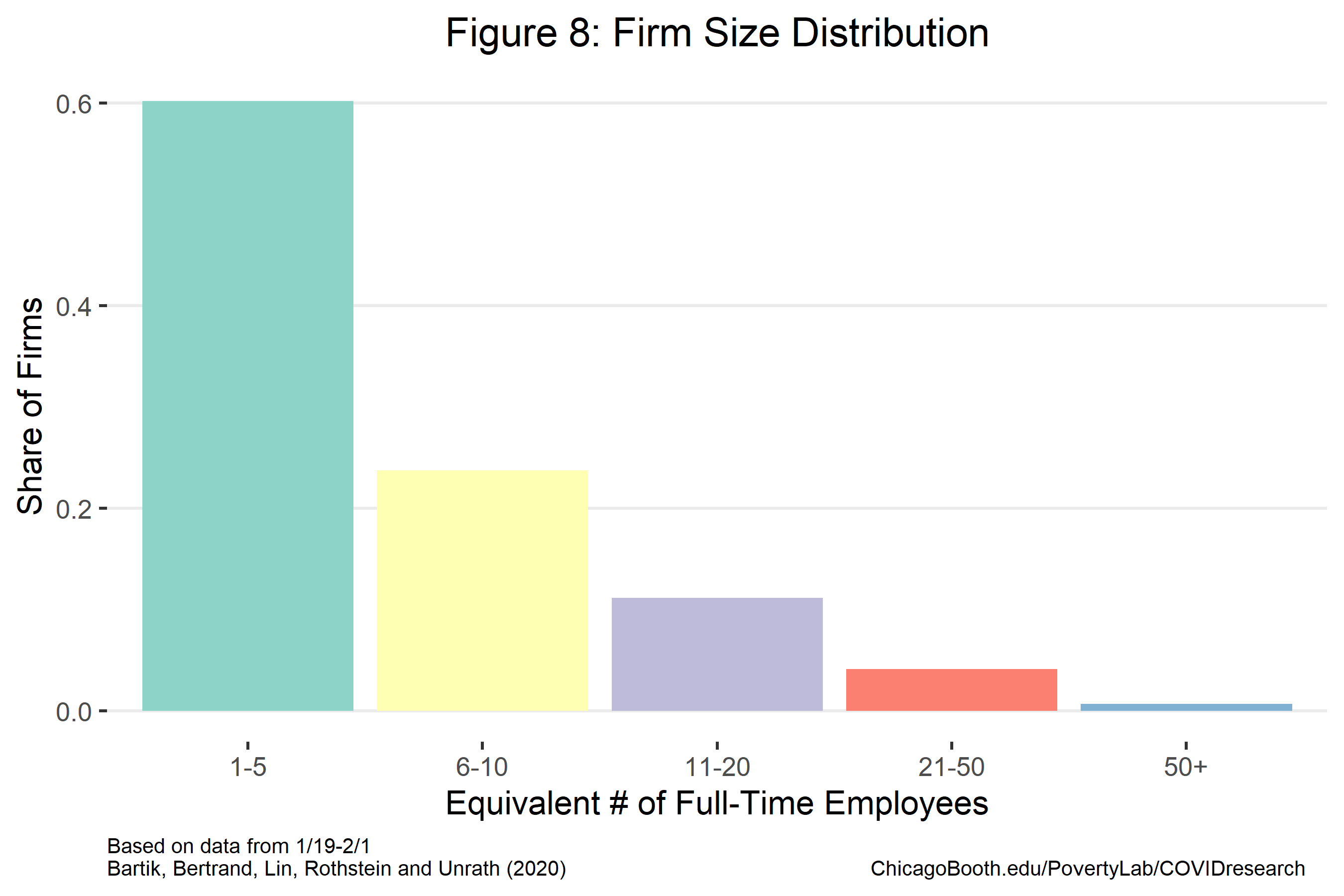