Below, we update our analysis of the labor market impacts of COVID-19 on small- and medium-sized businesses using Homebase time-card records and data collected between February and August 2020. To read our latest working paper, click here. We will continue to update these facts, tracking patterns and adding new information as the COVID-19 situation develops. An up-to-date version of this summary will be maintained here.

Fact #1: The recovery has plateaued

The US labor market collapsed over roughly two weeks in late March and early April. Since then, we have tracked a fairly steady recovery in work hours at Homebase firms. A substantial share of firms that closed reopened and many workers were reemployed.

Since we authored our first post, we’ve also documented employment changes measured by government surveys of both workers and firms — the Current Population Survey (CPS) and Current Employment Statistics (CES) —  as well as Kronos, another private provider of time clock software similar to Homebase. Each data source tells roughly the same story, though not quite as dramatically as Homebase.

Since mid-June, however, as Covid-19 cases resurged in several regions of the country, this recovery has plateaued. Hours worked at Homebase firms as a share of the January baseline peaked in June and have remained flat throughout July (Figure 1).

Figure 2 plots the evolution of total hours per week worked among firms in our sample from mid-January to late July.  Each sub-plot shows the distribution of hours across firms, measuring each firm relative to its average hours per week in a base period of Jan 19 – Feb 1. By the week of March 15, the distribution shifts dramatically left, reflecting the collapse of the labor market between March and April. At the height of the crisis, over 40 percent of firms in our sample were shut down entirely. Between April and June, the share of firms reporting zero hours worked ticked down each week, and the distribution shifted back to the right. However, the final five frames, capturing weeks between late June and late July, show that this recovery appears to have stagnated. The share of firms that remain closed stalled at just over 20 percent. Indeed, in the last week, the share closed ticked upwards for the first time since April. As in previous updates, we decompose the loss of hours each week relative to the January baseline into three sources: firms that remain shutdown, hours cuts for retained workers at open firms, and layoffs.

Figure 3 reports the percent change in hours each week since early February attributable to these three channels. Except for the first week of the labor market collapse1, reductions in hours per worker as defined above have accounted for a very minor part of the change in total hours at Homebase businesses. Instead, the decline in total hours came primarily from firms that closed entirely and from reductions in the number of workers at continuing firms. Layoffs accounted for a larger share in March and shutdowns in April, but thereafter the two have had about the same quantitative impact on missing hours.

Between the end of April and late June, firms gradually reopened and restored their employees’ hours. However, since late June, reopenings and hours restoration have stalled. Since mid-June, we see neither net reopening of previously closed firms nor growth among those that have reopened. 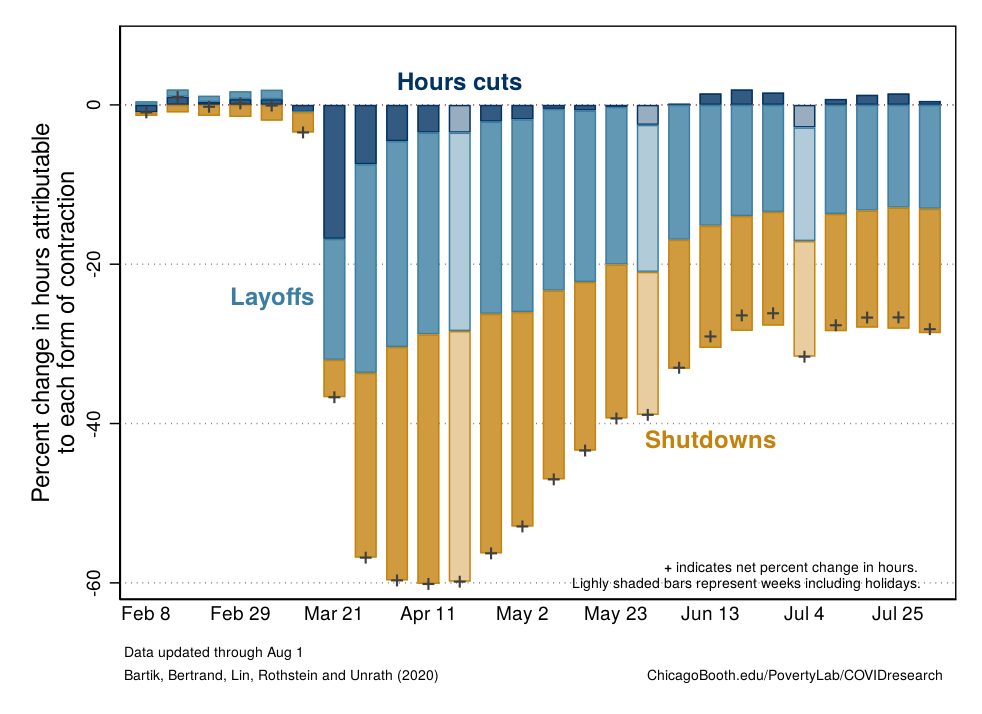 Unsurprisingly, the stalled recovery appears related to the recent rise in caseloads across the country.

Figure 4 plots the changes in hours at Homebase firms relative to the January baseline, within industry, separated into states with growing versus decreasing caseloads. In states where cases have recently surged, initial outbreaks were less severe, and one can see that the hours declines in those states were not as large. These states also saw faster recoveries in May. However, that pattern reversed by July. The effect of rising caseloads is most visible at leisure and entertainment establishments and beauty and personal care businesses, where hours started trending downward in these states by late June. Hours declines were large enough in states with rising caseloads that, for most industries, the overall hours declines have largely converged between the groups.

Figure 4: Hours reductions each day relative to baseline by industry and trends in state caseload 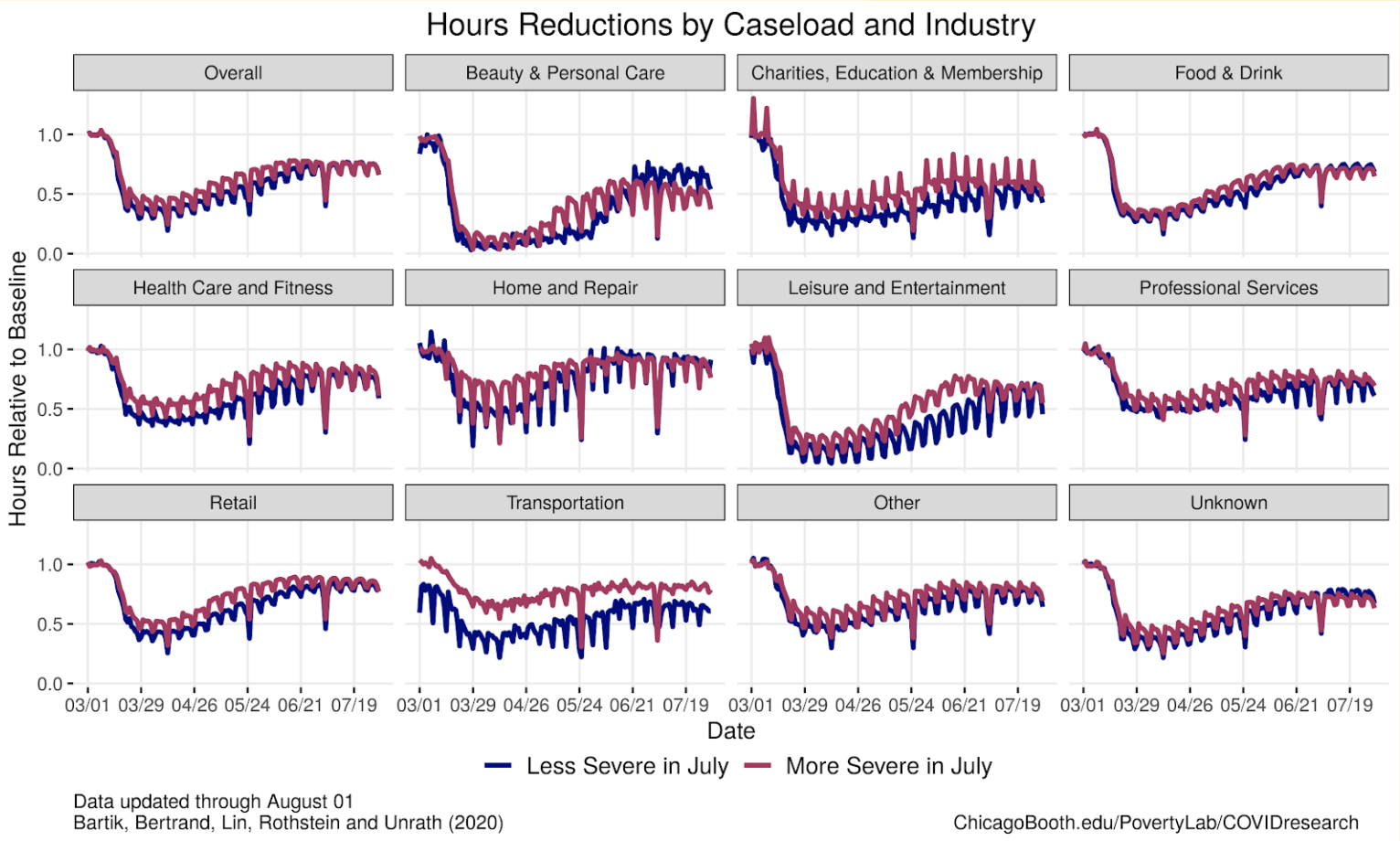 Fact #4: At firms that have reopened, most hours are still being worked by workers employed by the firm pre-shutdown

Of the roughly 42,000 unique firms in our baseline sample, approximately half (around 21,000) shutdown for at least one week in March or May. Of these firms that ever shut down, almost 13,000 have reopened and remained open through the week ending on Aug 1. In Figure 5, we show how much these firms’ baseline hours and workforce were restored through each week. By last week, these re-opened firms had collectively regained about 70 percent of their baseline hours and employment levels. Almost 75 percent of this reemployment came through re-hiring employees who worked at the firms before they shut down, and 25 percent from new hires. The share of hours worked by new hires has increased steadily each week since early April.

Figure 6 shows how hours have been restored (or are still missing) among firms that shut down before April 4. Across these firms, about 35 percent of their collective baseline hours remain missing due to ongoing firm closures. Another 20 percent of hours are lost because reopened firms are operating at reduced scale. The remaining share represents hours restored at reopened firms, which is split between old and new employees. Again, the gradual recovery we witnessed between April and June seems to have plateaued in July. The share of firms that have reopened has stagnated, and the share of original employees brought back has fallen slightly.

Figure 5: Percent of hours restored at reopened Homebase firms, relative to Jan 19-Feb 1, separated into those worked by re-hires versus new hires 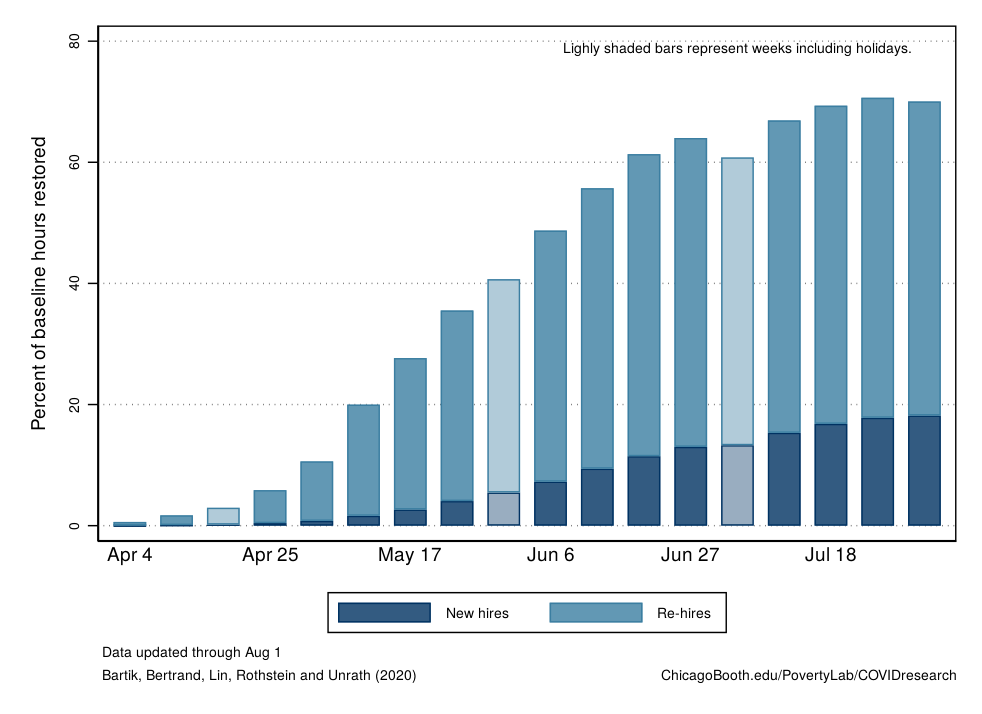 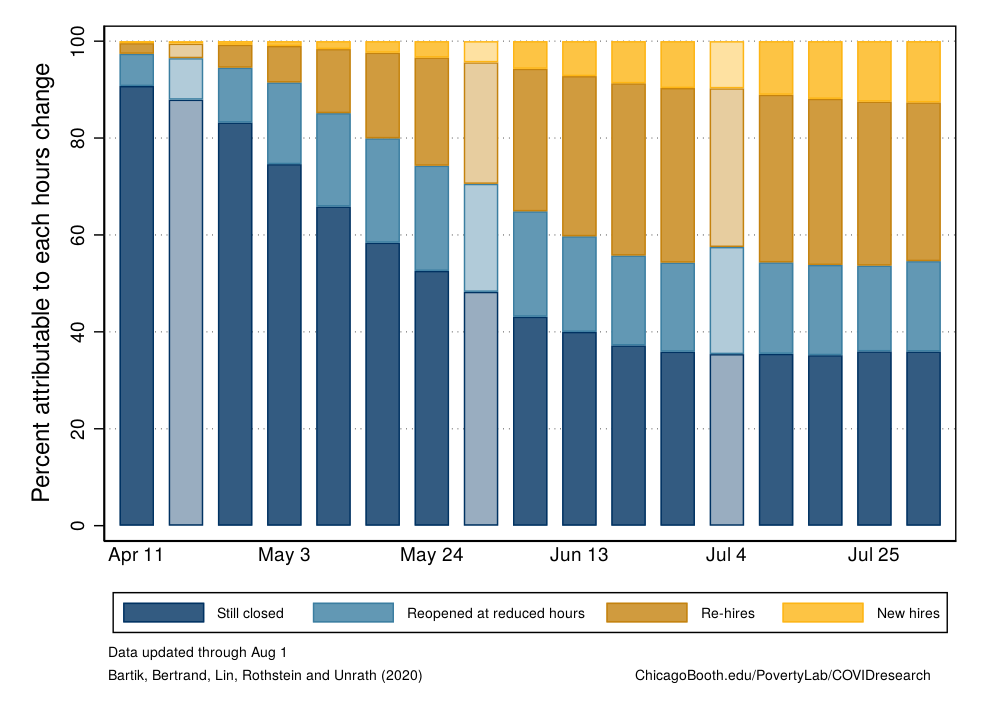 Our analyses are based on data on hours worked at the establishment-worker-day level generously made available by Homebase. These data extend from January 1, 2020 through July 2020. We aggregate the Homebase data to the firm-MSA-industry-day level. We restrict the sample to firms whose employees worked at least 80 hours between January 19 and February 1 and to states for which we observe at least 50 such firms. We refer to this two-week window as the “base period.” All analyses weight firms by their total hours during the base period.

In our analyses of weekly outcomes, we normalize each firm’s hours by dividing by the average hours worked per week over the base period at the firm. In our analyses of daily outcomes, we normalize by dividing by the average value of the outcome at the given firm on the same day of the week during our base period. For example, if total hours for a firm on Friday, March 13 was 100 and total hours for the same firm on Friday, January 24 and Friday, January 31 was 300, (150 on each day), the outcome variable total hours’ value would be .66. (This is 100 divided by (300/2), the average Friday hours in the base period.)

1 The large role for hours reductions in this week is an artifact created by mid-week layoffs or firm closings. When workers stop working in the middle of a week, our method counts that as a reduction in weekly hours that week and as a layoff or firm closing the following week.