Below, we update our analysis of the labor market impacts of COVID-19 on small- and medium-sized businesses using Homebase time-card records and data collected between February and mid-November, 2020. To read our latest working paper, click here. We will continue to update these facts, tracking patterns and adding new information as the COVID-19 situation develops. An up-to-date version of this summary will be maintained here.

The current surge in COVID-19 cases appears to be taking a toll on small businesses and their employees.

As in previous analyses, we track the impact of the pandemic on roughly 40,000 small businesses that use Homebase, an electronic time clock and scheduling service.

Finding 1: Recovery has stalled and begun backsliding. There has been little net recovery since June. In the last few weeks, we are seeing increased layoffs again.

Figure 1 illustrates how aggregate hours have changed relative to late January at these firms. We distinguish between three sources of hours losses: firm shutdowns, layoffs, and hours cuts. At the height of the crisis, total hours at these businesses fell roughly 60 percent relative to their January baseline. The decline in total hours was due primarily to firms closing entirely and to open firms laying off some portion of their staff. Between mid-March and early April, about 40 percent of the businesses in our sample shut down entirely for at least one week.

Between the end of April and late June, firms gradually reopened and restored their employees’ hours. By July, this recovery flatlined. Since then, there has been neither a net reopening of previously closed firms nor hours growth among those that did reopen. Close to one-quarter of firms that shut down in March have never reopened, and a similar fraction of firms that did reopen have since closed again.

As COVID-19 case counts started to rise again in late October, total hours fell for several consecutive weeks, the first time this has happened since April1. Shutdowns, layoffs, and hours cuts have all risen in each of the last three weeks. 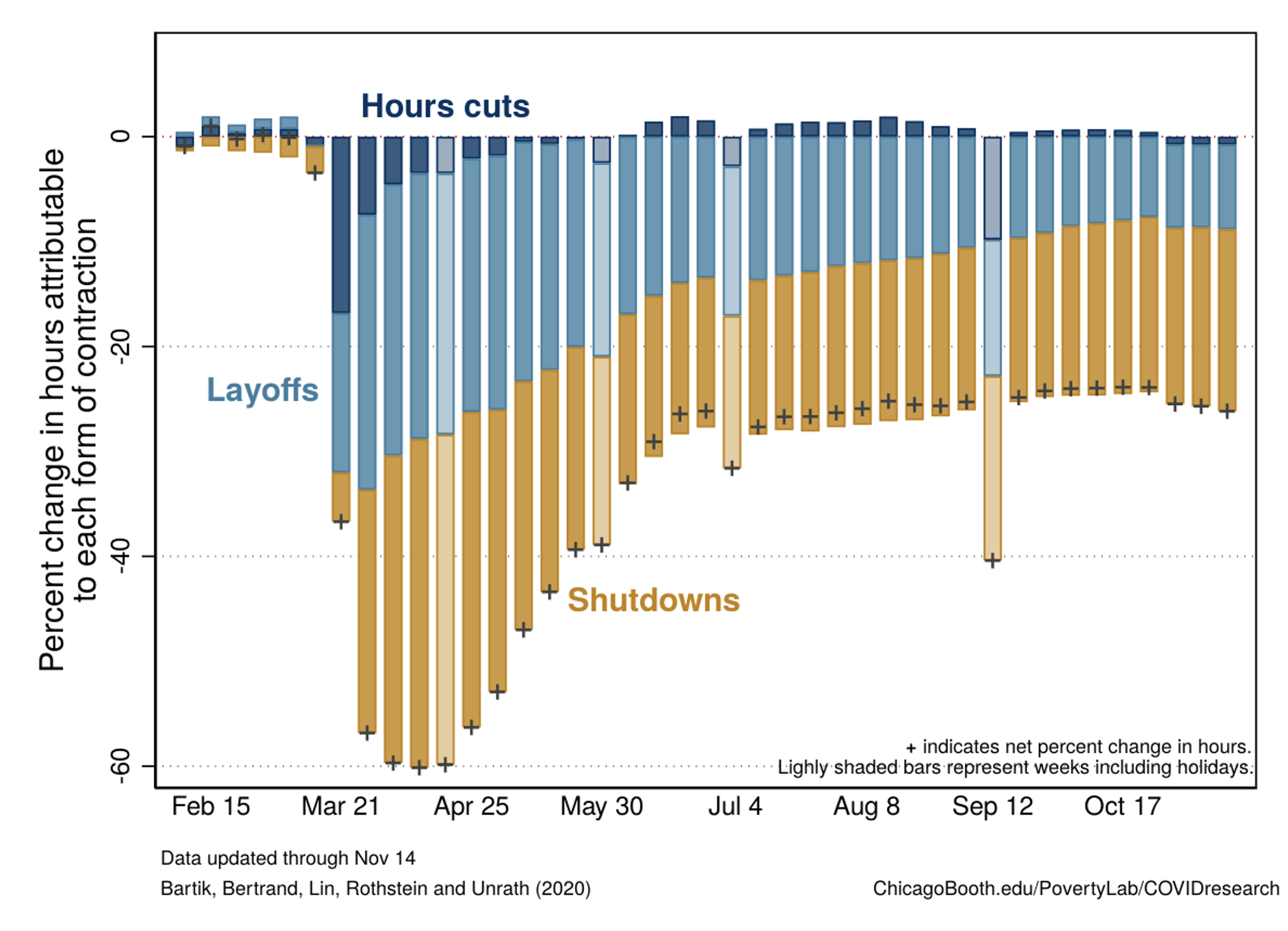 Finding 2: Some of the firms that reopened are shrinking or closing again. Most firms that have reopened did so by the end of June. In the last few weeks, some firms that had reopened closed again, and others have cut back.

Figure 2 summarizes how hours have been restored (or are still missing) among the firms that shut down before April 4. As of the week ending November 14, these firms have restored just half of their collective baseline hours. One-third of baseline hours remain missing due to ongoing firm closures, and around 15 percent are due to reopened firms operating at reduced scale. At firms that have reopened, two-thirds of hours in recent weeks were worked by individuals employed at the firms before the crisis, and one-third by newly hired workers.

Figure 2: Distribution of hours, relative to Jan 19-Feb 1, among firms that shut down between March 15 and April 4 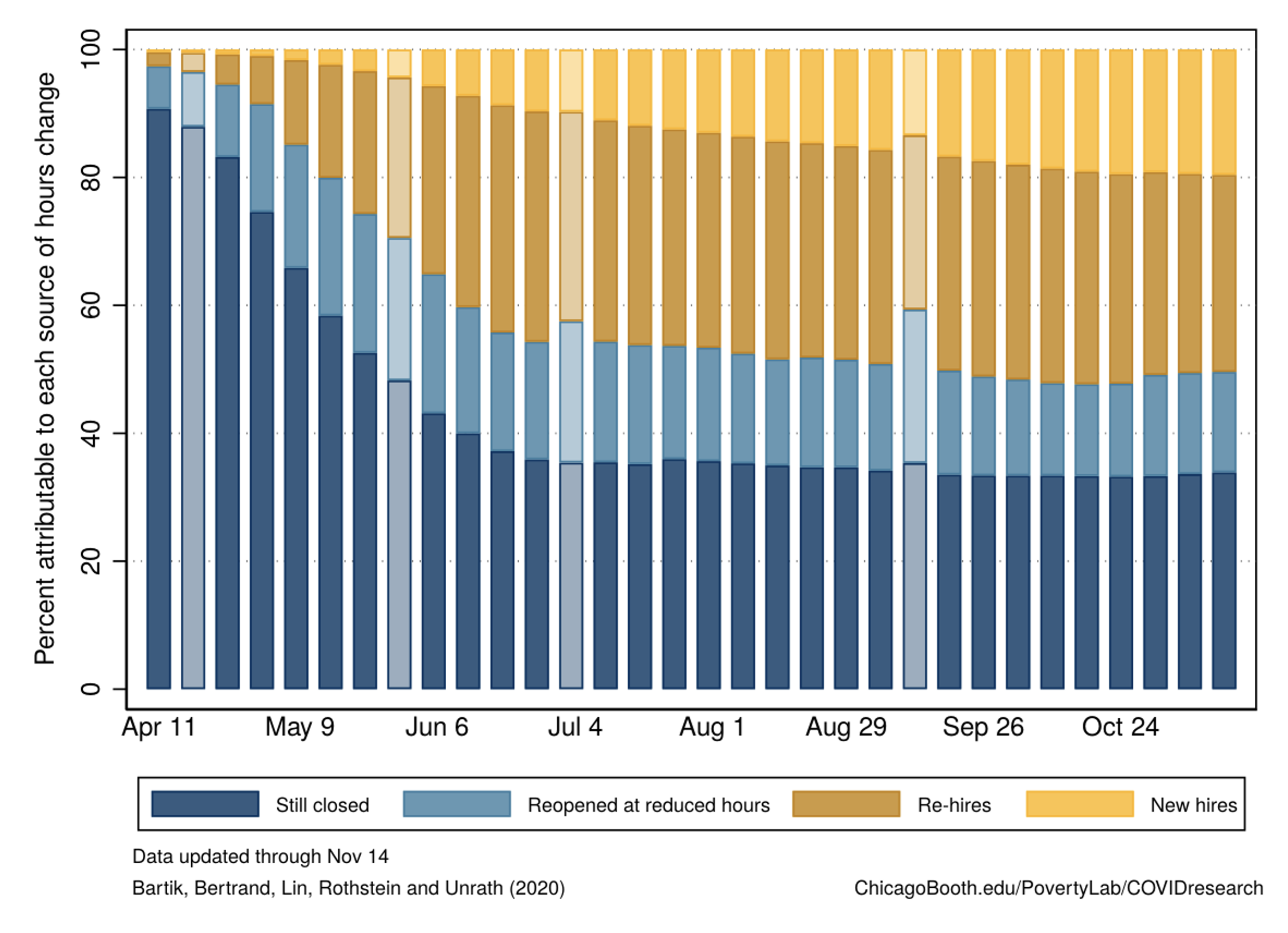 The stagnation over the summer, the recent uptick in layoffs and firm closures, and that the pace of the recovery appears to move with the COVID-19 case count are all worrying signs about our longer-term economic recovery. The current surge, and growing number of new local shut down orders, may heighten risks of closure for the small businesses that have managed to stay open and raise the probability that already closed small businesses never re-open.

Our analyses are based on data on hours worked at the establishment-worker-day level generously made available by Homebase. These data extend from January 1, 2020 through November 14, 2020. We aggregate the Homebase data to the firm-MSA-industry-day level. We restrict the sample to firms whose employees worked at least 80 hours between January 19 and February 1 and to states for which we observe at least 50 such firms. We refer to this two-week window as the “base period.” All analyses weight firms by their total hours during the base period.

In our analyses of weekly outcomes, we normalize each firm’s hours by dividing by the average hours worked per week over the base period at the firm. In our analyses of daily outcomes, we normalize by dividing by the average value of the outcome at the given firm on the same day of the week during our base period. For example, if total hours for a firm on Friday, March 13 was 100 and total hours for the same firm on Friday, January 24 and Friday, January 31 was 300, (150 on each day), the outcome variable total hours’ value would be .66. (This is 100 divided by (300/2), the average Friday hours in the base period.)