We recently discovered an error in our analyses of employment changes in the Homebase data. We are grateful to Lucas Finamor for bringing it to our attention. 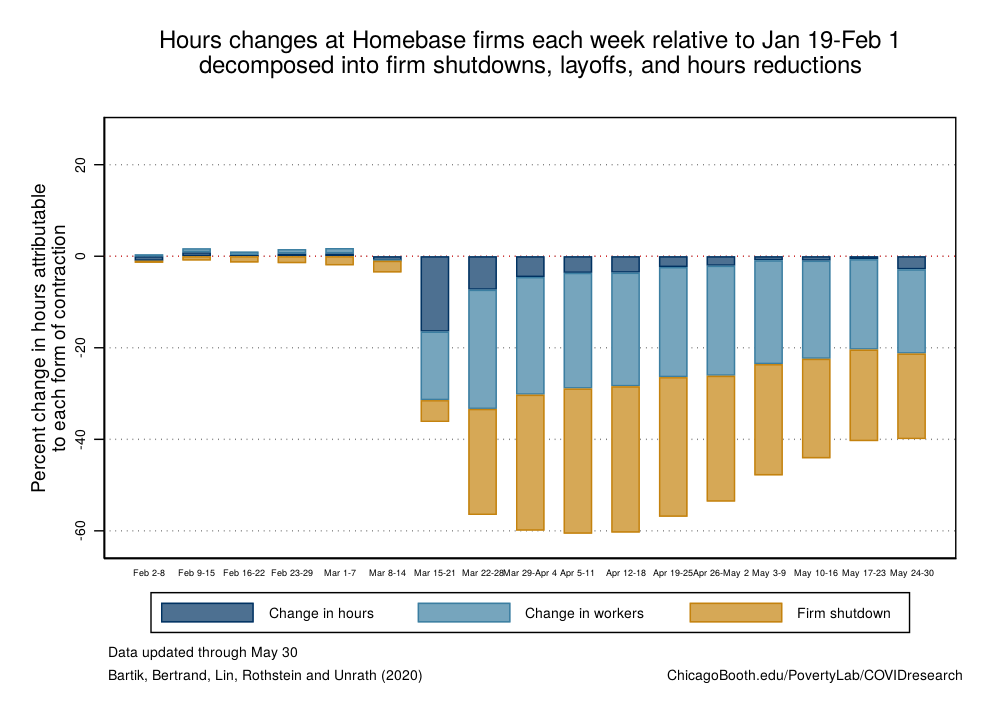 Overall hours worked at Homebase firms fell by 60% between the baseline period of Jan 19-Feb 1 and the week of April 5-11. As before, we find that the majority of this decline came from firms that closed entirely – that had no hours registered at all with Homebase during the week of April 5-11. We then decompose the remaining change in hours, around 28% of baseline, into a component coming from changes in the number of employees (counting only those with positive hours in the week) and a component coming from changes in average hours worked per remaining employee. Our earlier releases indicated that of these two, hours per worker played by far the larger role, but that was an error. Our corrected results, shown in Figure 1, indicate that hours reductions played a meaningful role in March 15-21, when they may have reflected workers who were laid off mid-week, but that thereafter reductions in firm headcounts were by far the dominant component.

This correction resolves an inconsistency with results reported by Cajner et al. (2020) from payroll records, which show substantial layoffs from continuing businesses.

This is more pessimistic news for the prospect of a quick recovery, as workers who have been separated may be less likely to be recalled than workers whose hours are cut but who remain attached to the employer. As we look at the weeks since the nadir, and consistent with this grimmer picture, the recovery has been driven more by reopenings of previously closed firms than by recall of laid off workers. The error does not affect our previous finding that firms that have reopened have largely done so by recalling their former workers rather than by bringing on new employees, suggesting that temporary dis-attachment need not be permanent. This will be an important margin to track going forward.