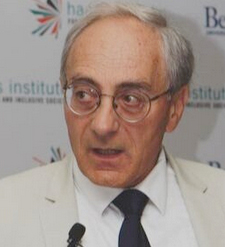 Michael Reich is Professor of Economics and Co-Chair of the Center on Wage and Employment Dynamics at the Institute for Research on Labor and Employment (IRLE) of the University of California at Berkeley. He served as Director of IRLE from 2004 to 2015. Reich received his Ph.D. in Economics from Harvard. His research publications cover numerous areas of labor economics and political economy, including the economics of racial inequality, the analysis of labor market segmentation, historical stages in U.S. labor markets and social structures of accumulation, high performance workplaces, union-management cooperation, Japanese labor-management systems, living wages and minimum wages.

Should the federal minimum wage be increased?

Massachusetts Uber/Lyft Ballot Proposition Would Create Subminimum Wage: Drivers Could Earn as Little as $4.82 an Hour

Other Publications by Michael Reich