It is well established that having a criminal record reduces one’s job prospects, but it has previously been unclear whether having a college degree improves the likelihood that formerly incarcerated people will receive an interview after submitting a job application. To address this question, Michael Cerda-Jara and a team of other UC Berkeley students from Berkeley’s Underground Scholars organization, along with UC Berkeley Professor David Harding, submitted fictitious job applications and interviewed formerly incarcerated men. This policy brief reviews this research and provides recommendations for policymakers.

The researchers find that formerly incarcerated men who graduated from college find it difficult to be hired for jobs that require a degree, indicating that a college degree fails to eliminate criminal record stigma. The study shows that college-educated men with criminal records receive callbacks half as often as those without a record, and college-educated Black and Latino men with records are less likely to receive a callback than their white counterparts. Rather than Ban-the-Box, policymakers should consider stronger interventions to improve the job prospects of college-educated people with criminal records, including more aggressively enforcing anti-discrimination laws, banning discrimination based on a criminal record, expanding and simplifying clean slate opportunities, making certificates of rehabilitation automatic, and eliminating formal occupational licensing bans.

Between 70 million and 100 million Americans have a criminal record (almost one-third of the country’s population), and eight percent of all adults have a felony record.1,2 Those released from prisons and jails face barriers because of stigmas associated with a criminal record, especially when it comes to employment opportunities.3,4,5 In fact, a 2003 study revealed that for applicants with criminal records, employer callbacks are reduced by 50 percent.6 A 2010 report revealed that 71 percent of employers would “probably not” or “definitely not” hire a worker with a criminal record.7 However, these studies focus on the low-skill labor market, while over one-fourth of individuals released from prison ages 18-25 will eventually enroll in college.8

There are reasons to suspect that the labor market for college-educated workers may work differently than for the low-skill labor market. Employers hiring college-educated workers may be more aware of regulations and guidelines covering employment discrimination, like those set by the Equal Employment Opportunity Commission (EEOC).9 EEOC guidelines prohibit employers from making hiring decisions on the basis of criminal record until a conditional job offer has been made. Although the EEOC guidance aims to increase employment opportunities for people with criminal records, it is unclear if it benefits those seeking employment in the college-educated labor market. Since obtaining a college degree can require a large investment of time and money, it is critical for policymakers to understand whether education makes a difference for the job prospects of the formerly incarcerated. Further, since jobs that require a college degree typically offer better pay, health benefits, and better working conditions than low-skill jobs, it is important to understand whether individuals with criminal records even have access to such jobs.

In order to assess the extent of discrimination in the job search, an experiment with the following elements was conducted: 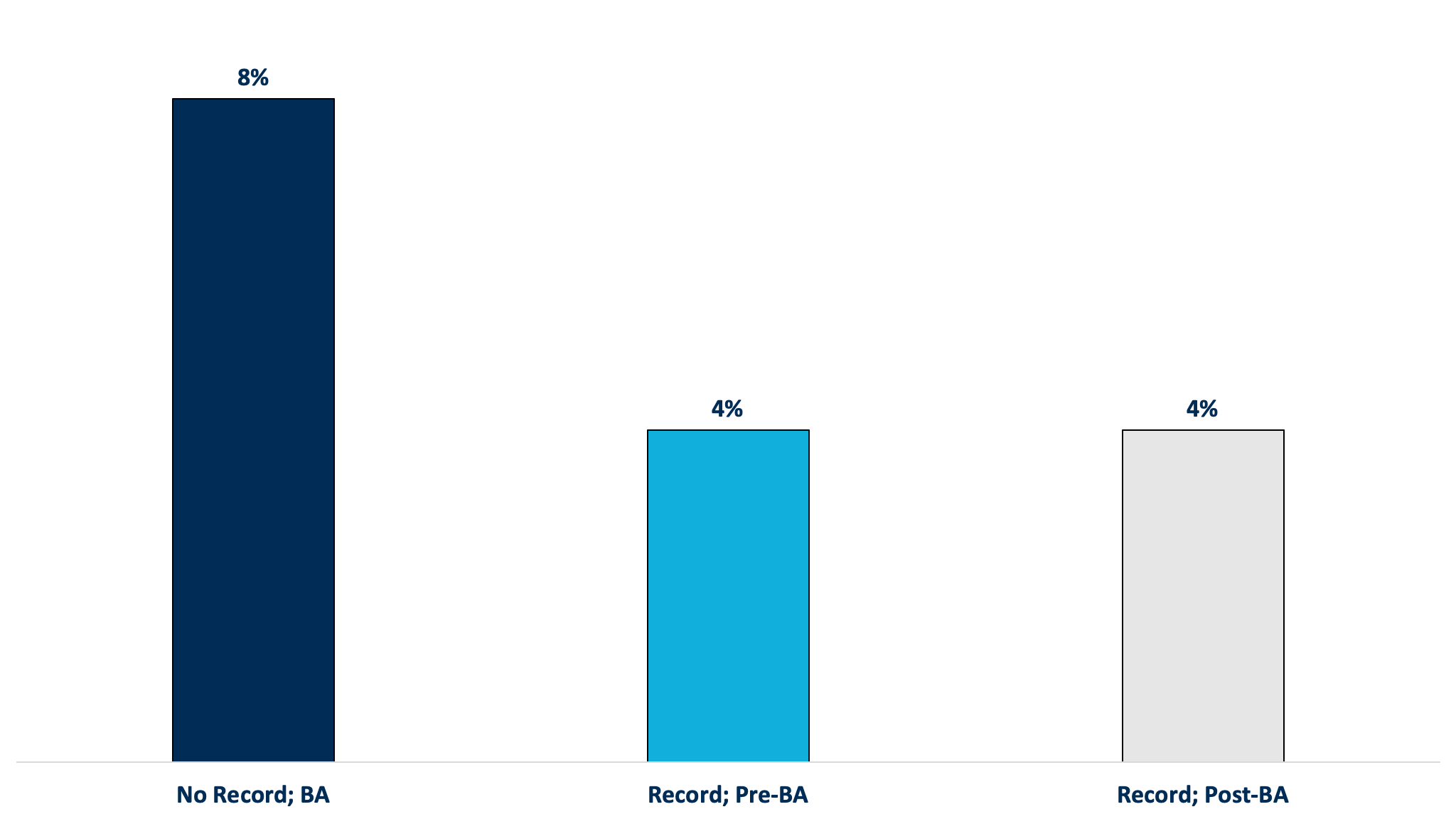 Figure B. Success of Callbacks by Race + Record Type 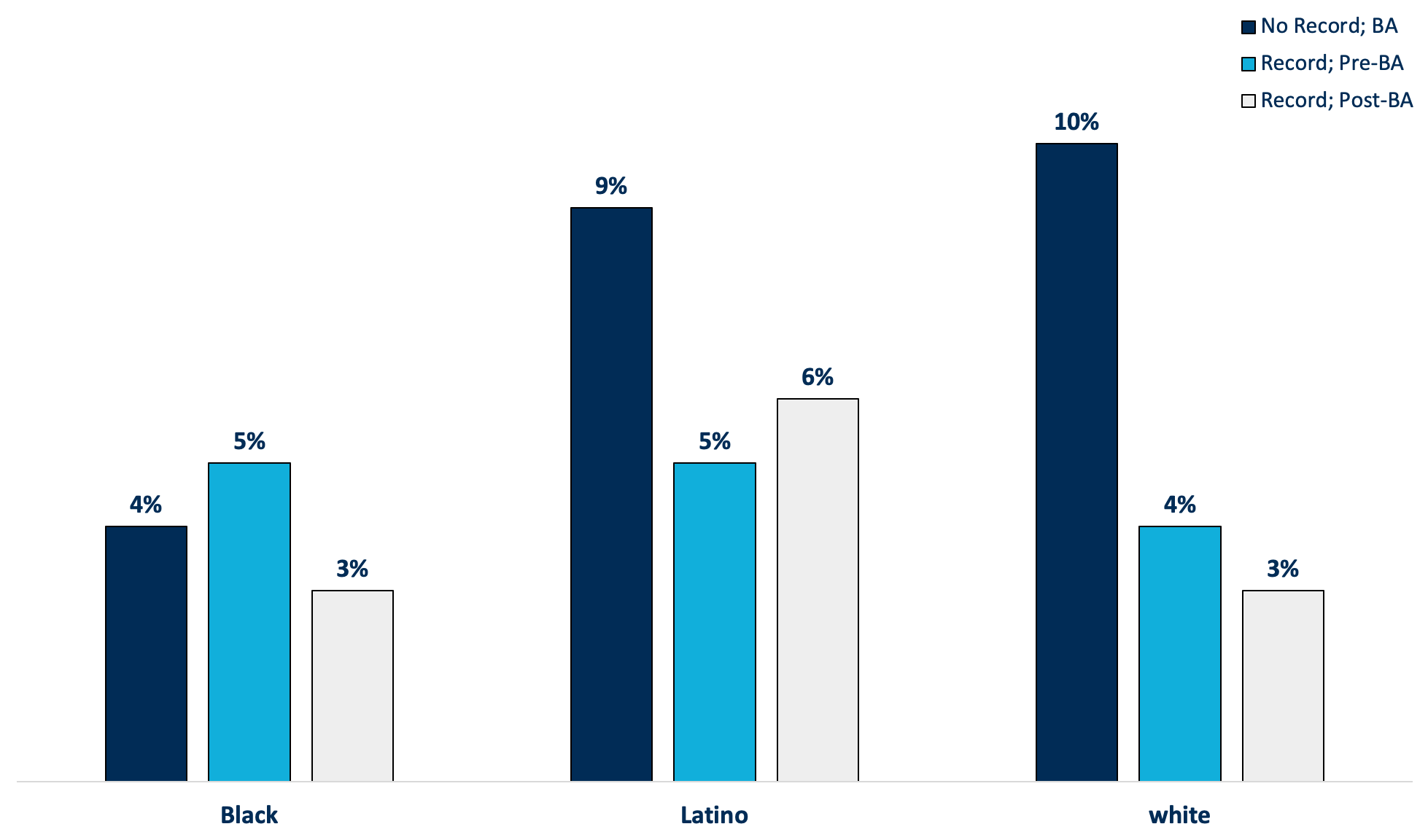 Interviews with College-Educated Men with Records

The findings from the interviews demonstrate that formerly incarcerated men struggle with the following when applying to jobs:

Ban-the-Box is a policy that aims to give job applicants with criminal records a fair chance at landing a job by removing criminal history questions from job applications. The primary goal of this policy is for employers to consider the qualifications of the job candidate before making a decision based solely on criminal history. In short, Ban-the-Box aims to provide applicants with criminal records the opportunity to get their foot in the door.

According to a report by the National Employment Law Project, 35 states and over 150 cities and counties have now adopted Ban-the-Box policies.10 However, there are some key points to address with Ban-the-Box policies. For example, a 2016 study found that Ban-the-Box actually increases racial inequalities by decreasing employment chances among Blacks when employers cannot ask about criminal records. This is because of racial discrimination stemming from stereotypes that Blacks are more likely to have a criminal record.11

Since the present study was done in a state that has a Ban-the-Box policy, this study’s interviews reveal another issue with Ban-the-Box – such policies may do less to secure employment for college-educated applicants with criminal records. With a college degree failing to eliminate criminal record stigma, the background check after a conditional job offer remains a key problem that current Ban-the-Box policies do not address. Getting one’s foot in the door is simply not enough to level the playing field.

To address this issue, policymakers should consider the following recommendations that go beyond Ban-the-Box to improve the employment prospects of people with criminal records:

By implementing these reforms, states can increase job opportunities for the formerly incarcerated.

Michael Cerda-Jara is a formerly incarcerated, first-generation transfer student from Newark, CA who is completing his B.A. in Sociology at the University of California, Berkeley. Michael is an Underground Scholars Initiative Student Advisory Board Member, Regents’ & Chancellor’s Scholarship recipient, 2018 Summer Undergraduate Research Fellow, 2018-2019 Ronald E. McNair Scholar and 2019-2020 Robert & Colleen Haas Scholar. In addition to his academics, Michael works as a Transfer Coordinator for the Berkeley Underground Scholars where he assists current community college students in applying to transfer to the University of California.

Aminah Elster is a formerly incarcerated woman completing her B.A. in Legal Studies. Aminah is the Ambassador Program Coordinator and Advocacy Chair for the Berkeley Underground Scholars Initiative, a Haas Public Service Leader, and sits on the Education Advisory Board for Voice of Witness, a non-profit organization that uses oral history to illuminate contemporary human rights crises in the U.S.

David J. Harding is Professor of Sociology and Director of the Social Science D-Lab at the University of California – Berkeley. He is the author of Living the Drama: Community, Conflict, and Culture among Inner City Boys (Chicago, 2010), On the Outside: Prisoner Reentry and Reintegration (Chicago, 2019), and After Prison: Navigating Adulthood in the Shadow of the Justice System (Russell Sage, 2020).

About the Underground Scholars

BUS challenges societal norms concerning incarcerated and formerly incarcerated people, specifically students impacted by issues of mass incarceration, imprisonment, and detainment of any kind. The goal of BUS is to bridge the popular academic theoretical discourse of mass incarceration with one that is grounded in the lived experiences of UC students and people from surrounding communities. The program aims to shift the school-to-prison pipeline to a prison-to-school pipeline using higher education as an alternative to incarceration.

The program provides students with a variety of academic and co-curricular support that are essential to achieving their academic, professional, and personal goals. Committed to current and prospective formerly and directly impacted students, BUS programs fall into three broad strategies: 1) Recruitment, 2) Retention, and 3) Advocacy and Policy.

The Institute for Research on Labor and Employment is an interdisciplinary institute at the University of California, Berkeley that connects world-class research with policy to improve workers’ lives, communities, and society. IRLE promotes better understanding of the conditions, policies, and institutions that affect the well-being of workers and their families and communities by informing public debate with hard evidence about inequality, the economy, and the nature of work.

We would like to thank our funders at the Institute for Research on Labor and Employment (IRLE), Regents’ & Chancellor’s for their research fellowship, and the SURF, Ronald E. McNair Scholars, and Robert & Colleen Haas Scholars research programs for their support in making this study possible. We would also like to thank our research assistants who helped with data collection: Maura Barry, Tonatiuh Beltran, Arturo Calvario-Diaz, Juan Flores, Sammie Gilmore, Apollo Rosas Hernandez, Da Eun Jung, Luiz Lopez-Ortiz, Brennan MacLean, Joshua Mason, Daniela Medina, Fernanda Ochoa, and Tanaell Villanueva Reyes. Last but certainly not least, we would like to thank those who have advised and helped us in many ways during this study: Dr. Christopher Muller, Dr. Laleh Behbehanian, Dr. Leah Carroll and BUS Program Director Azadeh Zohrabi.

1 Leasure, Peter, and Tia Stevens Andersen. 2016. “The Effectiveness of Certificates of Relief as Collateral Consequence Relief Mechanisms: An Experimental Study.” 12.

12 Title VII of the Civil Rights Act of 1964 prohibits employment discrimination based on race, color, religion, sex, or national origin.