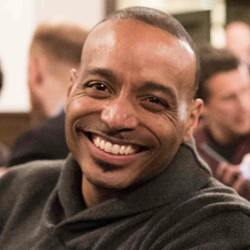 Rucker C. Johnson is the Chancellor’s Professor of Public Policy in the Goldman School of Public Policy at the University of California, Berkeley, and faculty research associate at the National Bureau of Economic Research.  As a labor economist who specializes in the economics of education, Johnson’s work considers the role of poverty and inequality in affecting life chances.

Johnson was inducted as the Sir Arthur Lewis Fellow of the American Academy of Political and Social Science, inducted as a member of the American Academy of Arts & Sciences, the National Academy of Education, and received the 2017 Andrew Carnegie Fellowship. His research has appeared in leading academic journals, featured in mainstream media outlets, and he has been invited to give policy briefings at the White House and on Capitol Hill. He is the author of the book Children of the Dream: Why School Integration Works.

Johnson is committed to advance his scholarly agenda of fusing insights from multiple disciplinary perspectives to improve our understanding of the causes, consequences, and remedies of inequality in this country. Johnson earned his Ph.D. in economics at the University of Michigan. At UC-Berkeley (2004-present), he teaches graduate and undergraduate courses in applied econometrics and topical courses in race, poverty & inequality.