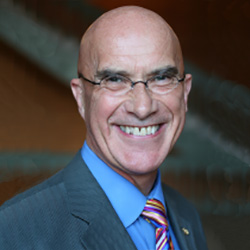 Professor Paul Wright is internationally recognized as a leader in design, 3D printing and manufacturing. His recent research has focused on the creation of self- powered wireless nodes for the Internet of Things (IoT). The Advanced Manufacturing for Energy (AME) lab has extensive experience in the design and manufacture of energy harvesting, including devices that utilize thermal electric generators (TEG), vibration energy harvesting, thin film solar cells, thin film batteries and super capacitors. 3D-dispenser printing and screen-printing allow us to create fully functioning IoT nodes with a wide set of performance characteristics. A detailed modeling tool on the performance of harvesters, batteries and super-capacitors allows an analysis of the various load-demand scenarios. Professor Wright joined the faculty of the Mechanical Engineering Department in 1992 and he holds the A. Martin Berlin Professorship. From 2007 to 2013 he was the Director of the Center for Information Technology for Research in the Interest of Society (CITRIS). Presently he is the Director of the Berkeley Energy and Climate Institute (BECI) and a co-director of the Berkeley Wireless Research Center (BWRC).