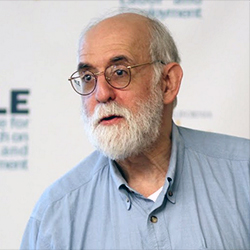 Jerome Karabel is Professor of Sociology at the University of California at Berkeley. He is the author of many works, including The Chosen: The Hidden History of Admission and Exclusion at Harvard, Yale, and Princeton, which received the Distinguished Scholarly Book Award of the American Sociological Association and The Diverted Dream: Community Colleges and the Promise of Educational Opportunity in America, 1900-1985 (with Steven Brint), which received the Outstanding Book Award of the American Educational Research Association.

Since the 1970s, Professor Karabel has had a special interest in the social consequences of politics of university admissions. In 1989, he chaired the Admissions and Enrollment Committee of the Academic Senate of the University of California at Berkeley and wrote the report, Freshman Admissions at Berkeley: A Policy for the 1990s and Beyond.